Vertical Mobile Video Ads: How to make use of Newfound Screen Real Estate on Phones

True to its namesake, vertical videos ads are videos that span the height of your mobile screen. Seemingly popularised by the rise of story-based advertising on Instagram, Facebook and Snapchat, the format has begun cropping up on traditionally "vertical" video platforms such as YouTube, since it was officially made available to advertisers in mid September 2018.

Vertical video ads seem to have several conditions as to when it serves, ensuring the experience is not jarring for the end user. From our observations, vertical ads tend to get served during pre-roll ads, before your actual content begins (when you're holding the phone vertically after browsing for content), and does not seem to serve when you've gone fullscreen and have your phone in a landscape position.

What exactly are Vertical Video Ads?

Vertical video ads, as the name suggests, is a video in a portrait format that is contrary to the usual landscape view, usually in a 9:16 ratio (but this can vary). The social media app Snapchat first popularised vertical video with their ‘Snaps’ - short videos in vertical format people could take and share with their friends that would last 24 hours.

Since then, Facebook and Instagram have also jumped on the bandwagon with their ‘Stories’ which functioned in the same way.

Popularised by the then-niche story format: vertical videos are moving into the mainstream.

For a long time, we have been conditioned to watching video in either the 4:3 or the longer 16:9 format and for the most part, it was suited to viewing on tv, desktop or in cinemas. In recent history, there was also a push for 1:1 video formats for optimal use on Instagram and social feeds. Today, times are a'changing once again - and as usual led by the advertiser's innate desire to reach users where they're spending their time, in formats that are familiar and intuitive.

In Asia Pacific, about 74% of all video plays in the second quarter of 2018 were on mobile devices - which is perhaps the reason why broadcast giant Netflix has begun trials in Malaysia for cheaper, mobile-only streaming plans - with chief executive Reed Hastings hinting the creation of 'mobile-first' films and TV in vertical formats might be on the horizon.

...people hold their mobile phones vertically 94% of the time.

It would then only make sense that content delivered on mobile adheres to the portrait orientation on these devices when a global study found that people hold their mobile phones vertically 94% of the time.

This is further fuelled by the popularity of live streaming videos, with nearly 80% of users watching Facebook Live videos. It can function as a marketing strategy without big budgets or endless production hours with videos such as “Chewbacca Mom” drawing an audience of 162 million viewers. Instagram has taken it a step further with IGTV - offering long-form video broadcast for content creators, banking in on the trend that viewers are willing to watch longer videos in vertical video on mobile.

Considering more than 70% of YouTube watch time happens on mobile devices such as smartphones and tablets, according to Google in 2018, it’s about time the video platform also moves into a mobile-optimised initiative for ads.

In September this year, YouTube announced that marketers can now publish ads in square or vertical video using its’ TrueView and Universal App campaigns.

This shows a shifting paradigm of users on mobile, and advertisers catering to mobile ad experiences.

What are the advantages of vertical video ads?

How to make vertical video ads work for you.

Who Should Use Vertical Video Ad Formats: And Some Examples.

Products who have great visuals and brands who rely on stellar visuals that would bode well for immersive formats should definitely consider vertical video ad formats. The vertical space allows you to show multiple things at one go, with copies, video samples and even call-to-actions peppered throughout your video - which when done right can prove to be a visual treat. Take for example the Playstation ad above.

Another segment are people who have mobile applications. Vertical videos could be a great way to showcase your app to new users, in the way your existing users actually see the app. This could prove especially immersive, as it essentially puts your app in the hands of those who have yet to even download it.

Hyundai recently tested out YouTube vertical video ads in combination with their horizontal video assets to introduce the world to a new SUV model. The result was a 33% percent lift in brand awareness and a nearly 12% lift in consideration, suggesting that vertical video is indeed the way to go.

Vertical Ad Formats - love it or hate it?

The usage of videos used to entail the need for unsightly "letter-boxing", with black borders enveloping a vertical video when played online. 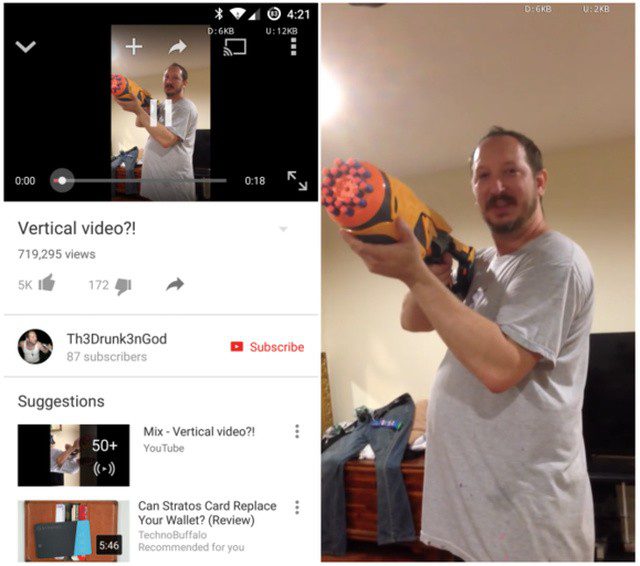 Example of vertical video letter-boxing in the past (via TechMyMoney)

Today, media platforms have adapted to user behaviour, and has paved the way for the format to become a fully immersive experience on mobile (where online videos are viewed most frequently). Vertical video not only benefits viewers but also advertisers - allowing for them to serve ads to users in the way they are already using their device, decreasing the feeling of a break in the user experience which makes users more aware that an ad has intruded their content consumption experience. When done right, vertical video proves to be both an effective marketing tool and a pleasurable experience for consumers.

In short, we think this is yet another step in the evolution of ad-formats, in the right direction.